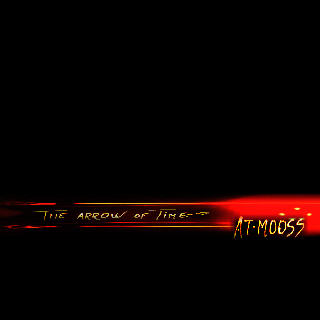 "THE ARROW OF TIME"

In this album, the band At-Mooss succeeds in impressing us once again with a risky artistic approach, as well as a technical mise-en-scine brimming with sound surprises. Exploring electronic music beyond the formal limits that labels dictate, the artists fly in absolute freedom among different trends, yet sculpturing a very coherent stylistic line which follows, in quite a number of aspects, the path they opened with their album "Cyclotron". One of the most characteristic traits in the album is its mysterious air, at times openly gloomy, as already suggested by the Edgar Allan Poe's quote displayed on the inner side of the cover. This mistic halo hovers somehow over almost all of the music. At times, it is about profound melodies, icy, sharp, as if they were directly retrieved from the nightmares of the collective subconscious. At other times, it's the sequencer rhythms the ones that, writhing like threatening screams stemming from maddened machines in  factories, drags us towards the Terror of Technology. All that is often wrapped into atmospheres rich in sounds that simulate all kinds of machinery. The music almost always has an indefinable nocturnal aroma, brimming with fog and smoke, and links with the darkest side of Industrial Music, while at the same time incorporating gothic, psychedelic and Dark Ambient traits, as well as the dynamics of Space Sequencer Music. Showing a great command of sound, the musicians sculpt an infinity of textures, arriving to passages where a classical orchestra coexists with sequencers of a markedly cybernetic nature. Also, the elaborated stereo panorama is likewise noteworthy, a panorama where, even with earphones one can hear some particular sound coming from outside of them, of "from behind".
JORGE MUNNSHE